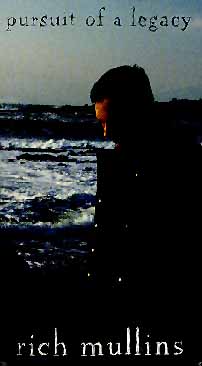 The "Pursuit of a Legacy" video was released soon after the album, A Liturgy, A Legacy, and A Ragamuffin Band, and contains five selections from the album. The spoken monologues between the music videos are typical of the "Rich-isms" he often tells at concerts and are all presented in informal settings as Rich simply chats and speaks his mind while the film rolls. A video review can be found at The Lighthouse Electronic Magazine from July, 1994.


That experience of standing by the side of the road and standing there with your thumb out and thousands and thousands of cars go by, and then one car stops and you get in that car, and suddenly you forget that you've been standing there for an hour. One act of mercy on the part of one guy erases the fact that thousands of people drove by and were completely apathetic. So one act of grace is a very profound thing. The world may be very cruel in very many ways, but that one act of grace that we see in Christ changes everything.


It started out with this guy who was yelling at this kid for running in the "House of God," because he was running through a church building, and I thought that was funny because I think the Bible was fairly explicit that earth is God's footstool and heaven is His throne - "What kind of house can you build for Me?" I think it's pretty explicit that the Body of Christ is also the House of God - that we are the temple, that it has to do with people, not with buildings. I've often thought, you know, people worry with the Catholic thing of revering Mary, and I've often thought, "Well, maybe it's not that they revere Mary too much. Maybe it's that all of us revere each other too little." And so I was thinking about this old man going to a meeting and realizing on his way that he'd already been in a meeting. It's just he hadn't been in a corporate meeting. He'd already been surrounded by the presence of God. And he looks out, and of course he's a farmer, and has an appreciation for seasons - has an appreciation for that kind of thing. And all of a sudden he realizes that God invented green.


When it all came together is when we were all in Amsterdam. I just became really keenly and uncomfortably aware of how you know you think you're getting somewhere - you think you're growing as a Christian, that kind of thing. And all of a sudden you're in a situation where you go, "I am just as susceptible as I was when I was sixteen," to a lot of things. Sometimes we can be really hard on ourselves about that. Well, Beaker and I were talking in a train station about the whole thing - kind of where we were and where we wanted to be - and we'd gotten into some pretty explicit detail about the nature of our temptations and of those struggles. And this guy leans over - and we're in Germany and assuming that nobody would be interested enough in whatever we would have to say to actually bother to translate and listen. But this guy leans over in the train station - the only other guy in there - and says, "Excuse me, but are you Rich Mullins?" So I had to think back over our conversation to see if I was or not. And decided that I must be. Whether or not I like who I am, that is who I am. Once again, it's back to the ragamuffin thing. The realization that people are going to judge you. There are actually people who I think look for excuses to condemn you and look for excuses to say bad things about you. But God doesn't look for those kinds of excuses. I think the conclusion of the matter for me was that I think I would rather live on the verge of falling and let my security be in the all-sufficiency of the grace of God than to live in some pietistic illusion of moral excellence. Not that I don't want to be morally excellent, but my faith isn't in the idea that I'm more moral than anybody else. My faith is in the idea that God and his love are greater than whatever sins any of us commit.


I think that one thing that happens frequently is that we twentieth century American people interpret love when we read it in the Bible, we think of it as being the kind of love that we see in movies and love that we read in dumb novels. The love of God is most expressed in the death of Christ, which was a very violent act on the part of mankind. It was not a pretty sight. But I don't think anything less dramatic could even begin to express the intensity of God's love for us, which is what Brennan talks about in "The Ragamuffin Gospel" - that God loves us with an intense love, that He pursues us. That it's not a "God loves you if you're good." It's not a "God loves you if He's having a good day." It's "God loves you desperately, passionately" It's a hard thing to get a hold of - especially in the twentieth century frame of mind. I think it's time to get past the twentieth century and get into the way things really are.

Last spring we went to Bogota, Colombia, and one of the really shocking things we saw in Bogota were the street kids. These are kids that come from the area around Bogota and they have no way of making any kind of a living, and they end up running in kind of herds. Their lives are pretty desperate. At the same time we saw that, we saw about three people at the Compassion organization that had been sponsored children. And we saw that these people were able to read, and these people were able to make a living. These people were able to make a contribution in their own country with their own work. The difference between the lives of those people who were sponsored and the lives of kids who have no sponsorship and who really have no bright horizons in their world is amazing. Seeing that firms up my belief that we can make a difference in someone's life and that their lives can make a difference in our own. Compassion is not a matter so much of our merely giving as it is an opportunity for us to be a part of making God's love visible in places where we may never get to go ourselves.

Return to Calling Out Your Name
In addition to the copyrights on the material presented here, the html code is copyrighted by Brian William, 1996. Please ask permission before electronically reproducing it.